It’s been a while since we announced the court dates and we’re sure you’ve all been waiting with bated breath to know what happened, so drumroll please…… nothing. That’s right nothing happened, well nothing besides a paperwork error and a continuance.

Part of the court proceedings includes an investigation conducted by a neutral third party who will submit a report to the court. This report was supposed to have been completed on February 23, before the trial dates, but someone incorrectly marked the due date as March 23, so it wasn’t ready in time.  Thankfully the kids’ lawyer, K, pushed for the rescheduled date to be sooner rather than later and the judge scheduled the trial for the next available opening – May 21 and 22.

While we were of course disappointed to hear that the case was continued, we’re glad we “only” have to wait until May, because it could be worse – a lot worse. A couple who we took our MAPP classes with (for those of you who need a quick refresher those were our Massachusetts Approach to Partnerships in Parenting classes that were required to become certificated foster parents) also had a court date scheduled the same week for TPR (termination of parental rights) and also had a continuance. However, their case was continued until 2017!

Although hearing about the pushed court date was a bit of a headache, trying to schedule a time for the court investigator to come out and meet with us and the kids was an even bigger headache!

We can only assume that since the investigator’s report was supposed to be due on February 23rd that it was assigned sometime before then. However, we only heard from the investigator once the kids’ lawyer reached out to her the day of the continuance. Then we went back and forth for two weeks before deciding on a date. The date we decided on of course coincided with Meg’s doctor’s appointment, but she decided to reschedule since picking a date had turned into such a hardship.

The Sunday night before our appointment with the court investigator we got an email  – she had to cancel. Ugh. She offered up another date, which of course was inconvenient as Meg had an appointment after school in another town and wouldn’t be home until after five o’clock. The court investigator had suggested meeting around three or four o’clock. Wanting to be as accommodating as possible, we agreed to the new date on the stipulation that we meet after five o’clock. She never emailed back.

The day before the proposed rescheduled meeting Meg called to try and confirm the appointment but didn’t reach the investigator, so we were still in limbo. That night we celebrated St. Patrick’s Day with Meg’s parents. Sport had a grand time. He played with Meg’s parents’ dogs, a golden retriever and a yellow lab, played with the special toys that Grammy keeps at her house for Sport, and got to eat a giant cookie shaped like a basketball. Sunshine, however, was not feeling too sunny. She spiked a fever of 102 degrees and was very uncomfortable. We were without children’s Tylenol at Meg’s parents’ house so Marcy had to make an emergency trip to the store to buy some. After the medicine kicked in she was able to calm down a little bit, but only if she was being held.

The next day, the proposed day of the rescheduled appointment, Sunshine was still warm and she added diarrhea to her ailments, that we would soon find out also included a double ear infection. It was a work from home day so Marcy could try and nurse little Sunshine back to health. She was a relatively happy little baby in the morning, even playing a while before the diarrhea and red bottom really kicked in.

Right around the time Sunshine started going downhill and she was crying uncontrollably, Meg called to let Marcy know that the court investigator would be at  the house at five o’clock perhaps beating Meg and Sport home. We weren’t prepared. We wanted to tidy up the house and fix a few things that we had been meaning to get to every weekend for the past couple of months. Of course, Marcy had an hour or so to get ready, but Sunshine wasn’t having any of it. She needed to be held and consoled.

Thankfully the house wasn’t a complete disaster. The court investigator came over and gave us a run down about how anything we say can be used in court, yada yada… We kind of figured that and we weren’t planning on saying anything that we wouldn’t want to be disclosed in court. Although just to note, what we said could be used in court but not our identities. We would be completely anonymous –Ms. X and Ms. X.

We chatted about how the children were doing at daycare, how they’ve adjusted to our home, the milestones they’ve achieved, and more. Then to finish up the meeting Sport proudly lead the investigator up to his room and then to Sunshine’s.

We were glad to finally get the meeting with the court investigator in the books. Despite being very busy, she was very helpful and professional. An important step in the adoption process was done.

In addition to meeting with us, the investigator would meet with the biological families as well as doctors, daycare providers, and pretty much anyone playing an important role in the lives of the children.

Now we wait until May…

And for this week’s photo break we bring you photos from a trip to the Ecotarium with Marcy, her brother Matt, her sister Missy and the kids: 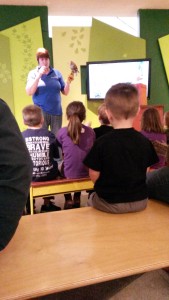 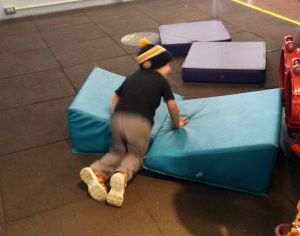